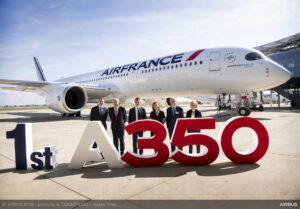 Air France has taken delivery of its first A350-900, the world’s most efficient all new design wide-body aircraft. The first jet out of a total order of 28 was handed over to Anne Rigail, Air France Chief Executive Officer and Benjamin Smith, Air France-KLM Group Chief Executive Officer, by Airbus Chief Commercial Officer Christian Scherer during a ceremony held in Toulouse, France.

Air France will deploy the A350-900 fleet on its transatlantic and Asia routes. The Xtra Wide Body aircraft features a comfortable three-class layout with 324 seats including 34 full-flat business, 24 premium economy and 266 economy class seats. Fully in line with Air France’s commitment to the environment, the all-new A350-900 will provide a 25% reduction in fuel burn and CO2 emissions. Additionally, the aircraft’s delivery flight from Toulouse to Paris will be powered with a blend of conventional and synthetic biofuel.

Air France operates an Airbus fleet of 143 aircraft. It includes 114 single-aisle and 29 wide-body planes. The airline recently opted to purchase Airbus’ newest aircraft family member, the A220, which will join the fleet over the next years.

At the end of August 2019, the A350 XWB Family had received 913 firm orders from 51 customers worldwide, making it one of the most successful wide-body aircraft ever.